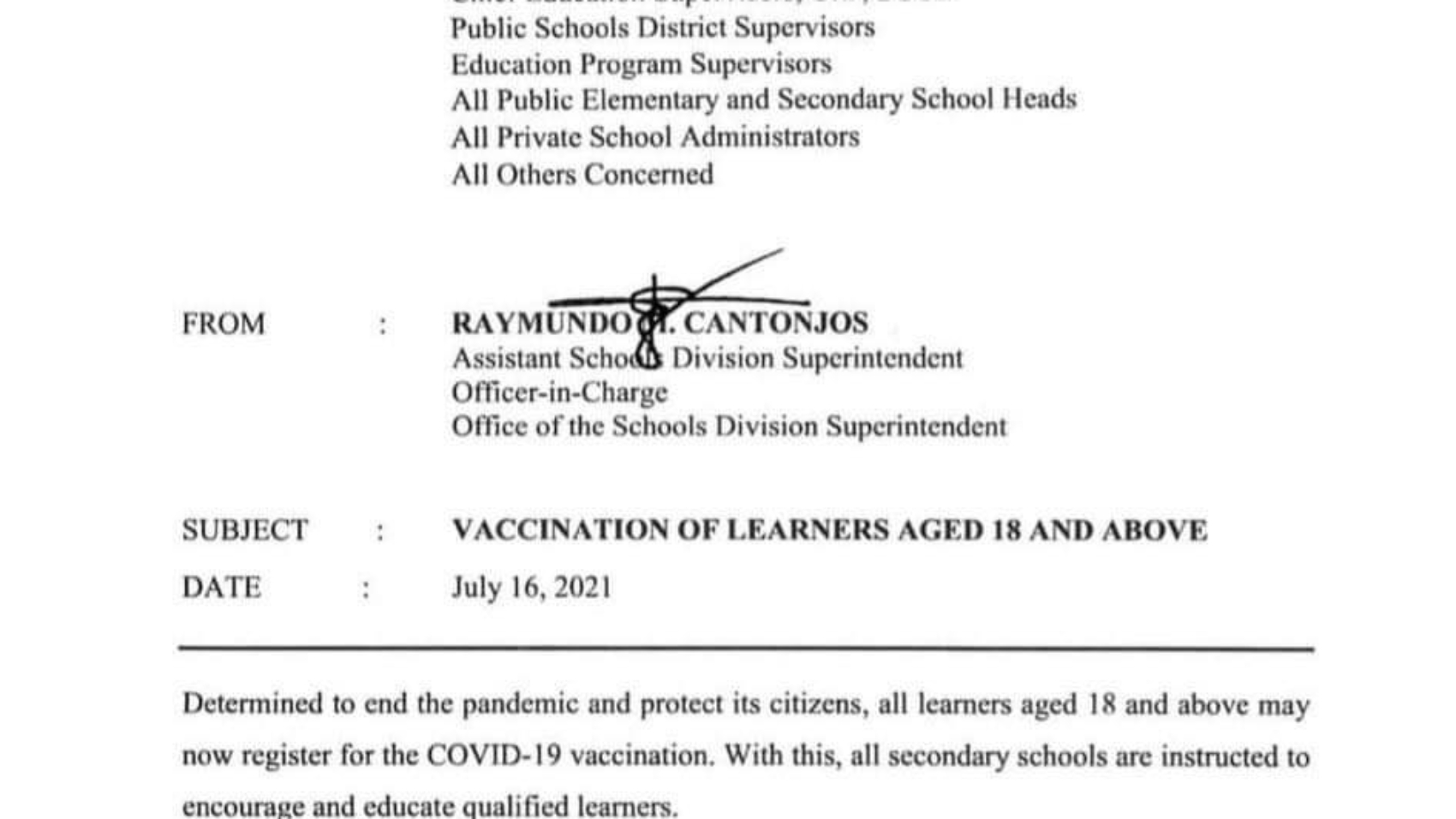 Our university president, Junifen F. Gauuan, Ph.D. adheres to the memorandum of DepEd Region IV-A, City Schools Division of Dasmariñas. He encourages all PCU Dasmariñas students aged 18 and above to register for the COVID-19 vaccination to protect its community and mitigate critical cases. 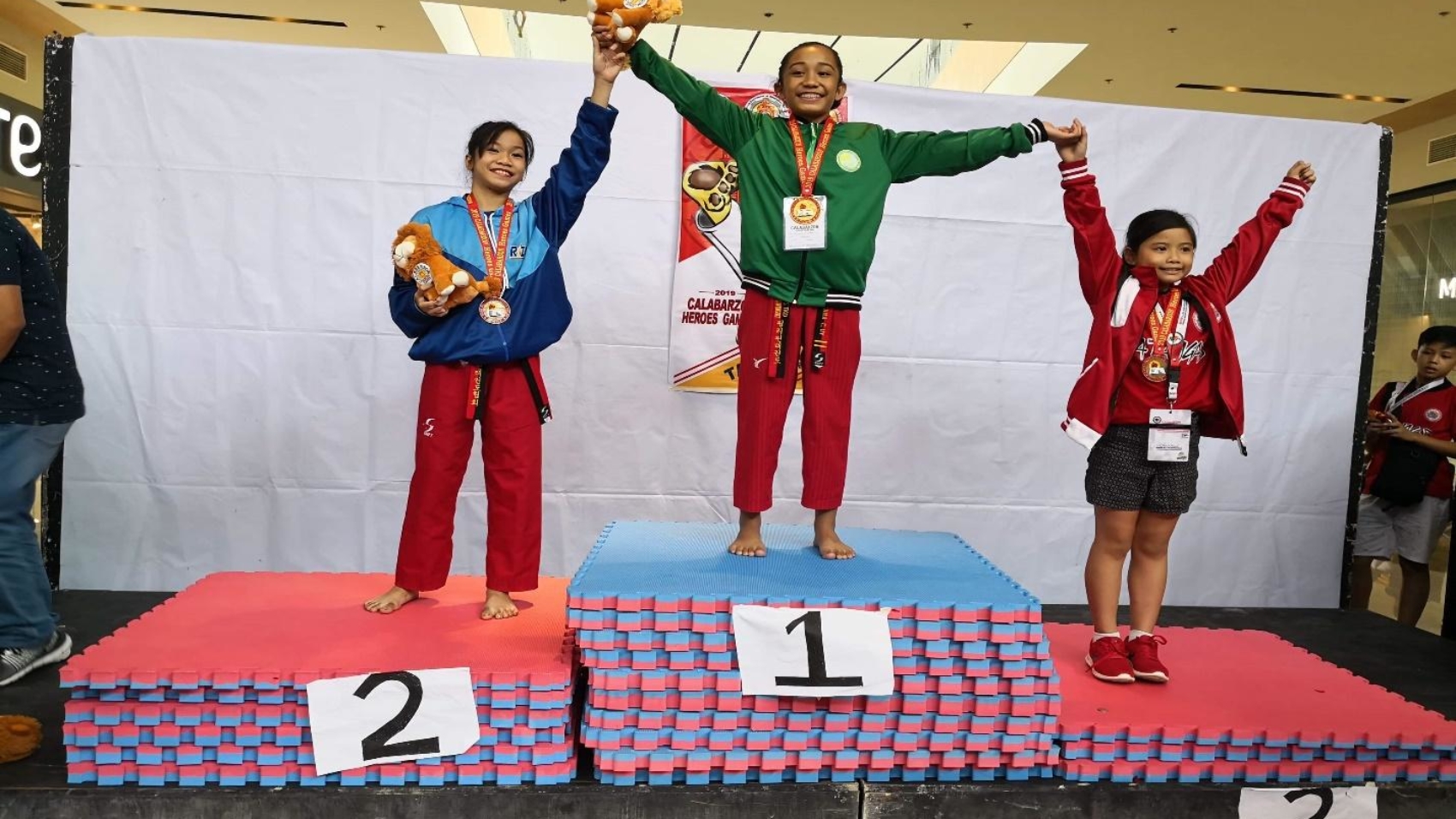 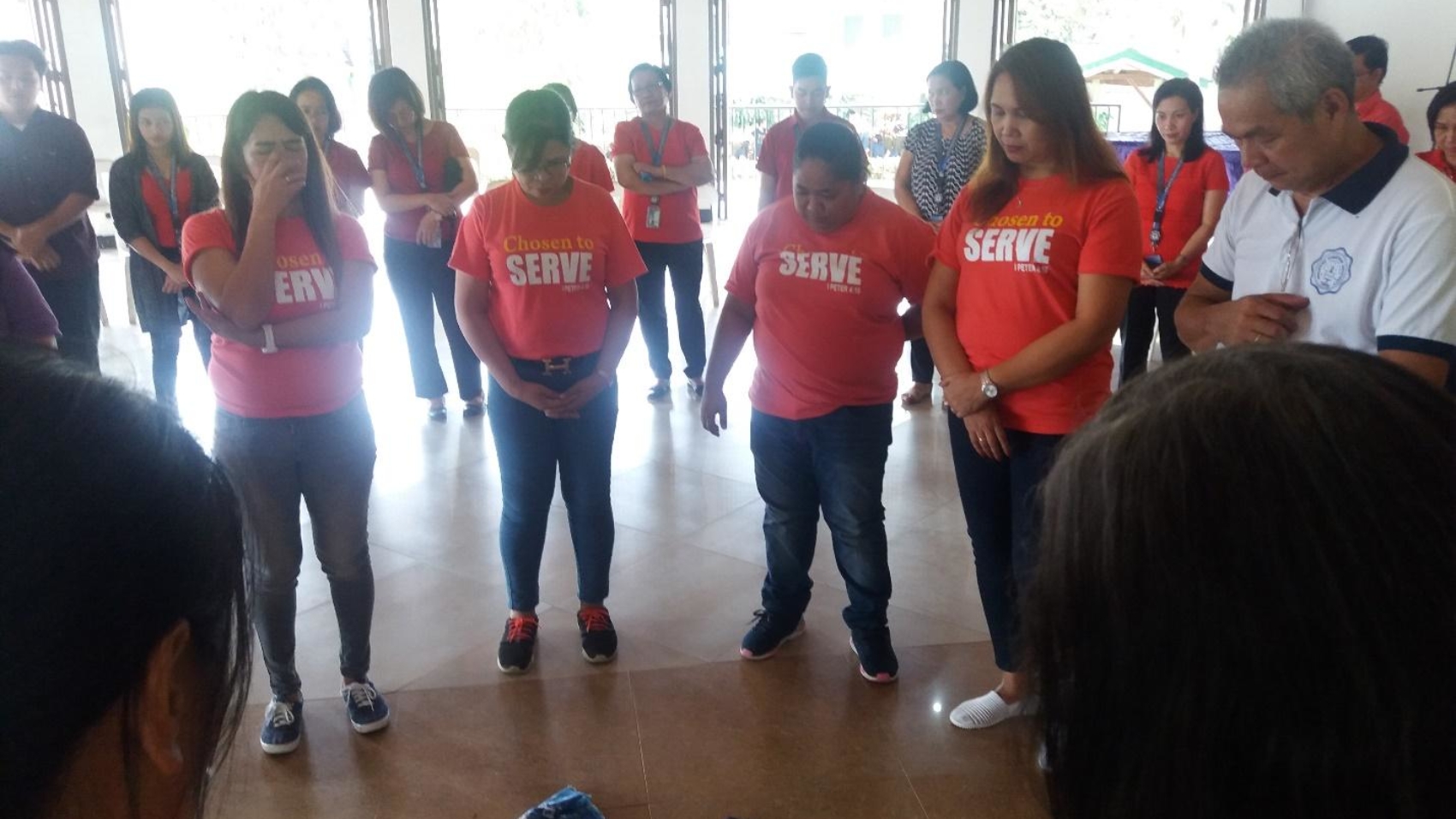 Members of the faculty and staff of the Philippine Christian University (PCU) Dasmariñas Campus unite in prayers last April 15 before the Lenten Season break inside the Salakot Chapel of the Union Theological Seminary (UTS).  Classes from elementary, junior high school and college departments were shortened to give way to the Faculty and Staff Retreat, which started at 3 p.m. The group did dance prayer, Bible reading, small and big group sharing, and writing.  “Let us remove the things that keep us away from Jesus this season of Lent,” said Pastor Janice Serafica, the university chaplain. “Let us keep ourselves near Jesus through our prayers.”

(Photos and text by Rosalina Sumagui) 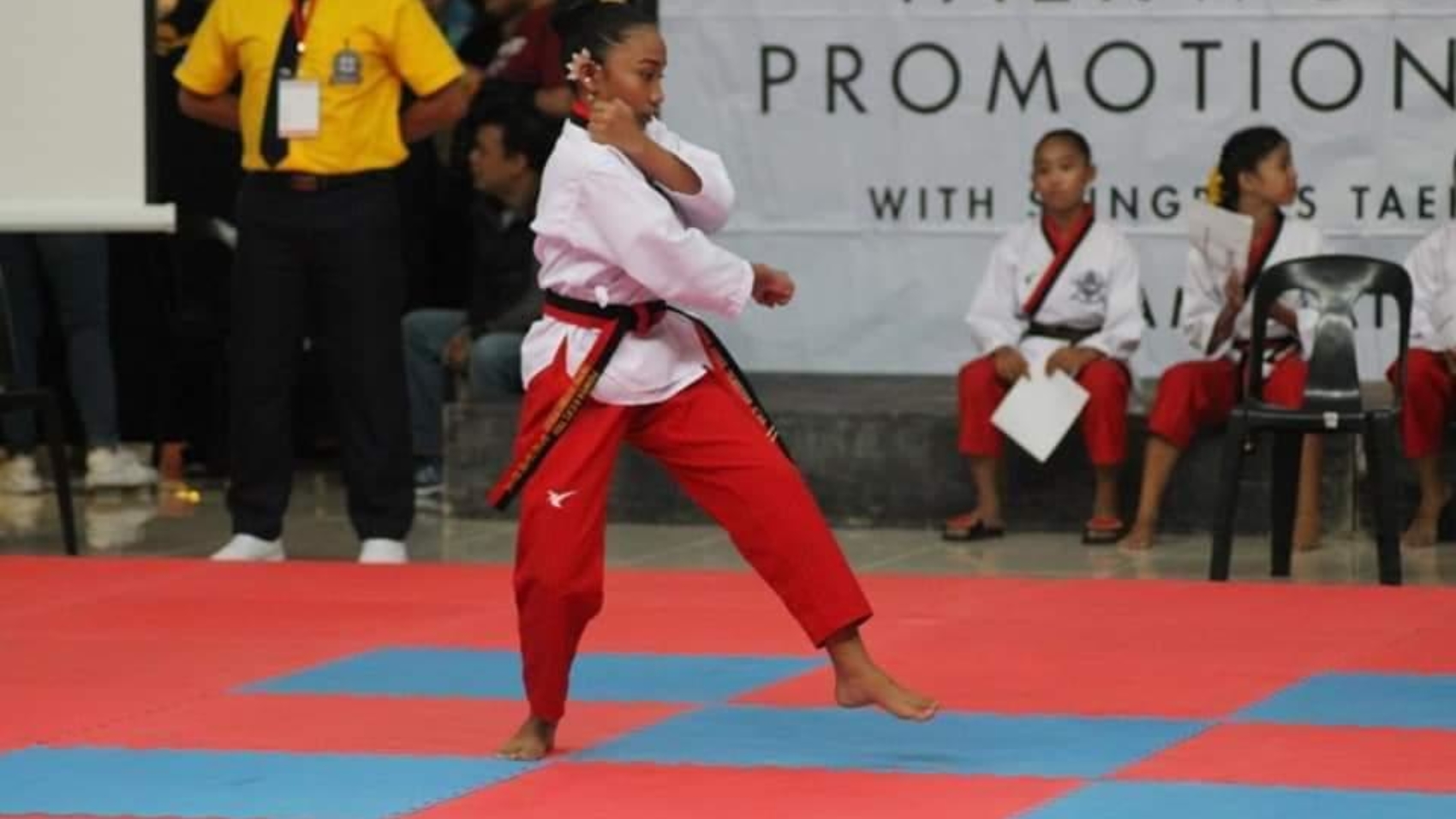 Taekwondo jin Myiesha Marie Jerriana Uy of Grade VI-Judges of the Philippine Christian University –Elementary Department (PCU-ESD) shows her skills in the Poomsae Competition during the Calabarzon Heroes Games in the Sta. Rosa Sports Complex in Sta. Rosa, Laguna last February 13. Myiesha Uy snatched the event’s gold medal after getting the highest score. Being the champion, she will represent  Region IV-A in the Palarong Pambansa in May 2019 in Davao City. “Go for it Myiesha! We’re behind you all the way,” assure ESD principal Dr. Lenalee Borromeo.

(Photos by Raquel Uy and Text by Rosalina B. Sumagui) 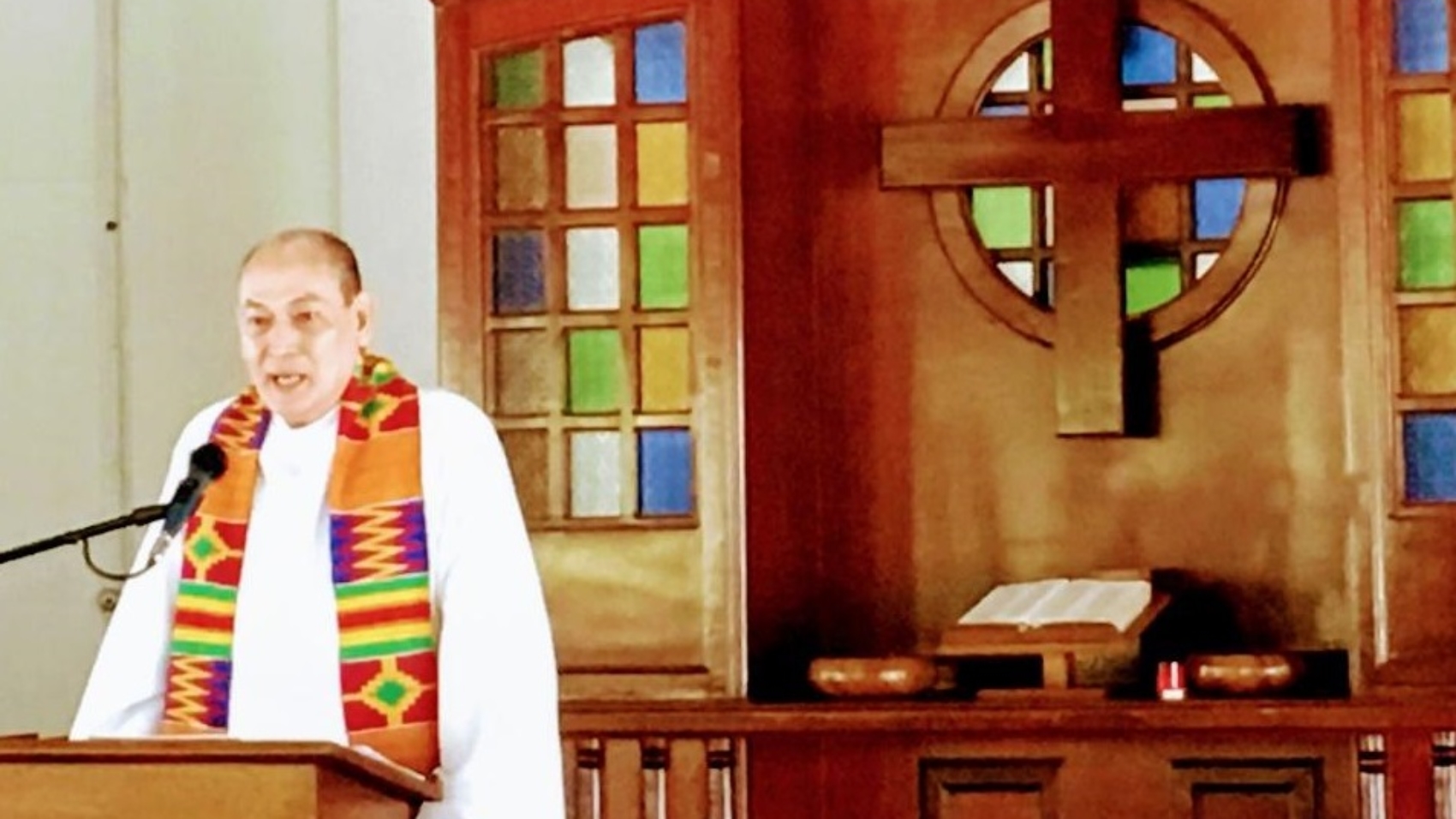 The Rev. Dr. Rafael Vallejo addresses the staff members of the Philippine Christian University-Dasmariñas Campus (PCU-D) and the Union Theological Seminary (UTS) in Dasmariñas City, Cavite during a special joint worship service held in Salakot Hall. The service was held before the much-awaited cake raffle took place. “Nurture faith and inspire character,” Reverend Vallejo urged the members of the congregation.

(Photo and Text by Jhun Dizon). 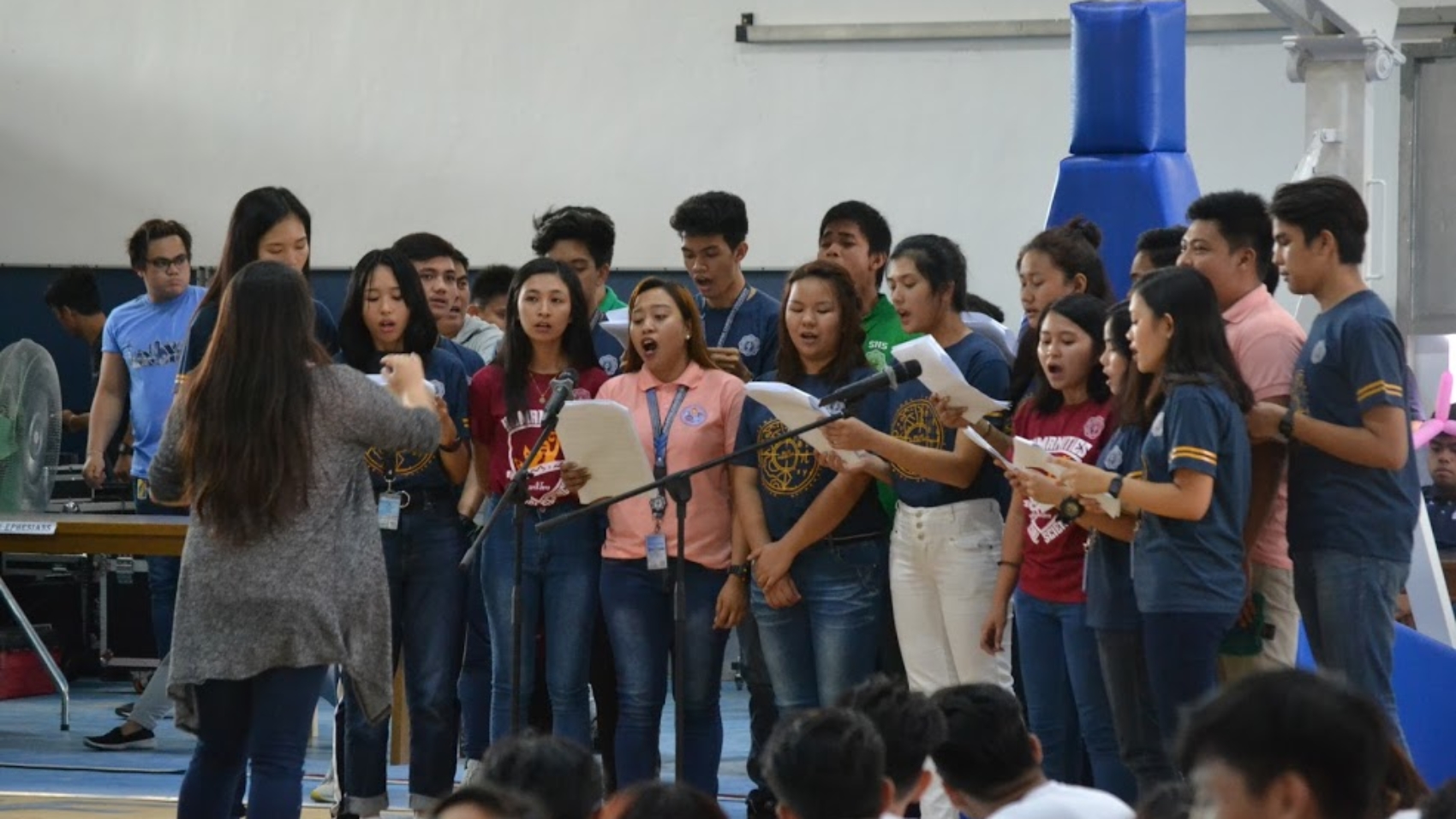 The Philippine Christian University-Senior High School (PCU-SHS) chorale performs during the opening of the SHS intramurals 2019 in front of a captivated crowd. The chorale is comprised of teachers and students who share a love for music. “Having a God-given talent is such a blessing; maximizing it through performances is such a great opportunity,” teacher Inah Dioso, who conducts the choir, said.

(Photo and text by Martin Cardaño) 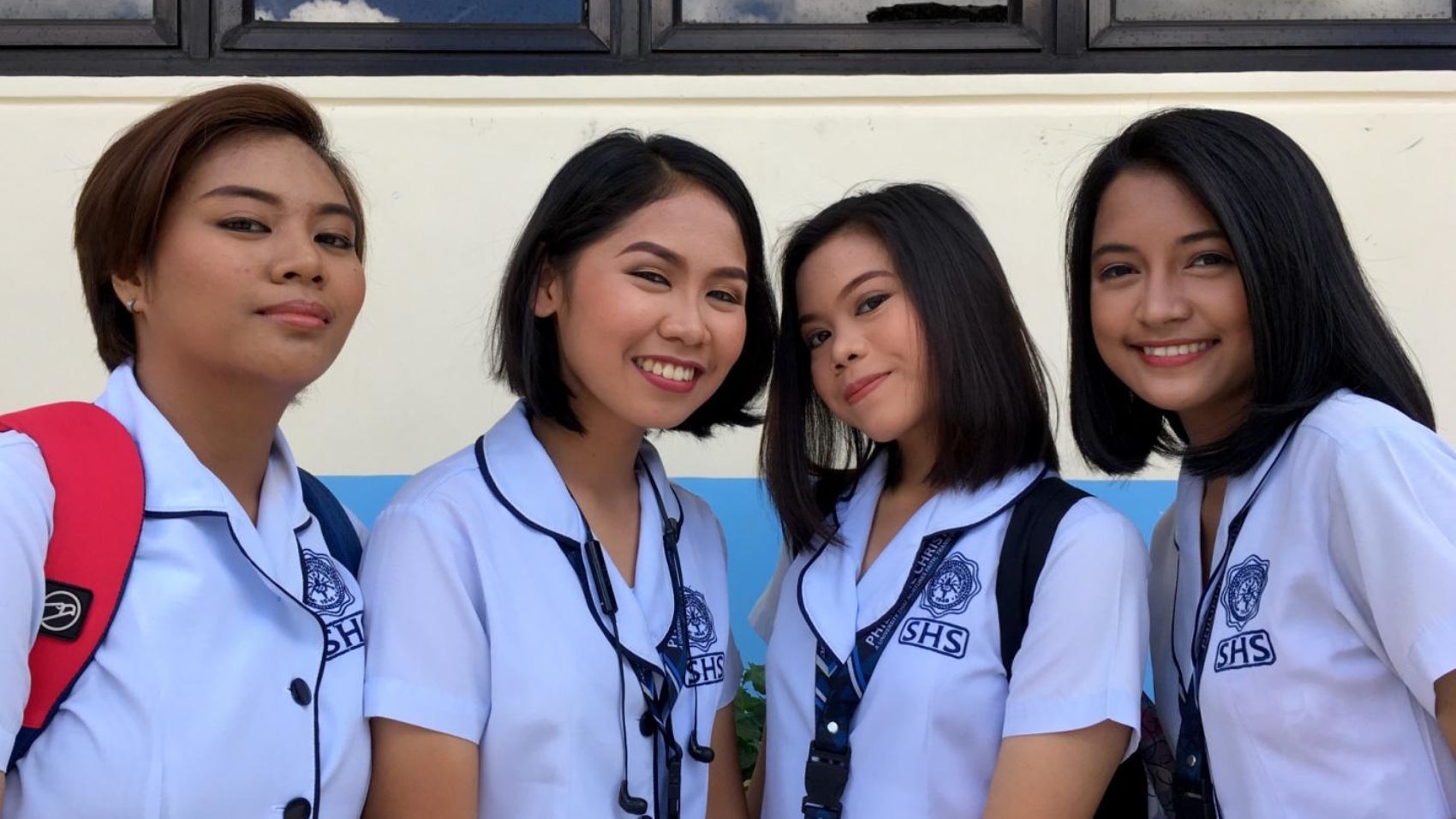 Four HUMSS 12 students, all glammed up for the graduation pictorial, posed once again in front of the lens to show off their fixed hairs, blushing cheeks, and their beautiful smiles.

Last March 18, graduation pictorial sessions for Senior High School students commenced with a team of make-up artists ensuring that the students were camera-ready.

“Ga-graduate !” Joyce Fernandez (rightmost) declared with delight as soon as the photo was taken. 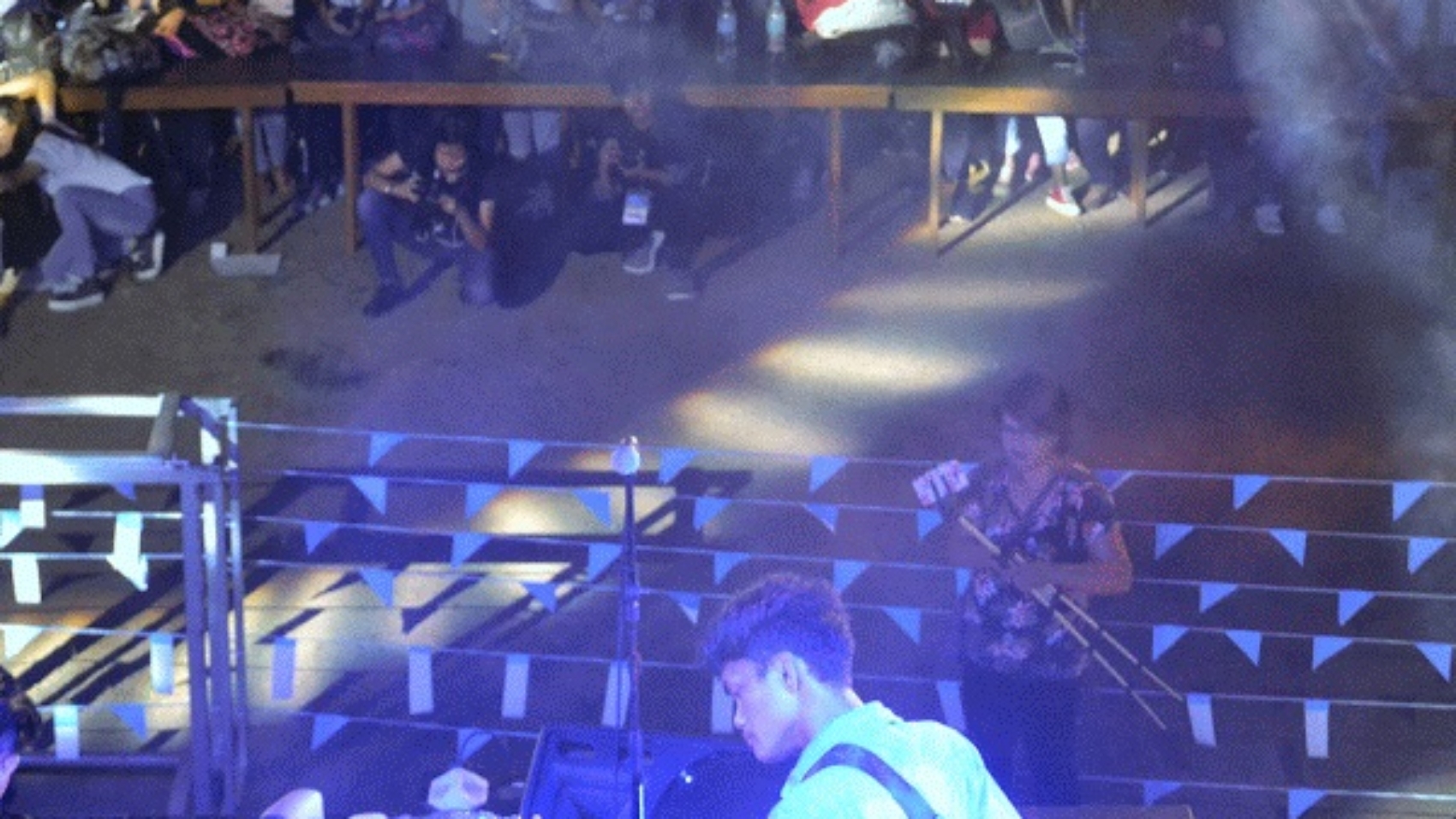 Fun and excitement filled the air around the grounds of the Elementary School Department (ESD) of the Philippine Christian University-Dasmarinas Campus last March 21 when a concert entitled, “Engkwentro: Generation Z Meets the OPM Legends,” was held to the delight of 1,500 members of the university community.

Students, faculty and alumni as, as well as their relatives and guests, parently enjoyed the musical night as they sang along and swayed in rhythm with the songs belted out by performers.

The concert became virtually a social gathering that brought the PCU-D community closer, thanks to music. Regina Monsanto, a Grade 11 student from STEM strand, and Mark Louis Ranola from HUMMS strand, hosted the event. Pavill Ambas, a Grade 12 Sports student, provided the comic relief by showcasing his talents in spoken poetry, singing dancing. The highlights of this concert were the awesome performances of the impressive VEAM Dance Company and a local rock band from Grade 11, “I Belong,” whose energetic rendition sent chills to everyone’s spine.

The Grade 12 band, “Ethell’s Angels X Satire Syndicate,” kept the stage simmering with their own type of rock music. Then there’s the “Fa-cool-ti” band, which showed off awesome voices and talents in playing different kinds of musical instruments. Everyone was serenaded with Pinoy folk songs of Lolita Carbon with the legendary band “Asin.” Their sometimes haunting melody and lyrics suggested loneliness and longing as part of life under the oppressive regime of the late President Ferdinand Marcos. Asin was the first band to incorporate Filipino indigenous instruments into pop or rock music.

The band called “This Band” brought the house down and touched the sentimental side of the listeners with its songs about heartbreaks. The crowd showed their “Tatakbo, , mo” energy during its performance. “I have nothing but a grateful heart to everyone who is instrumental in making ‘Engkwentro’ concert a reality,” graduating ABM student Jemimah Cayabyab said, referring to the first-ever concert in the PCU-Dasma Campus. “Thank you for making me experience this kind of event before I graduate.” 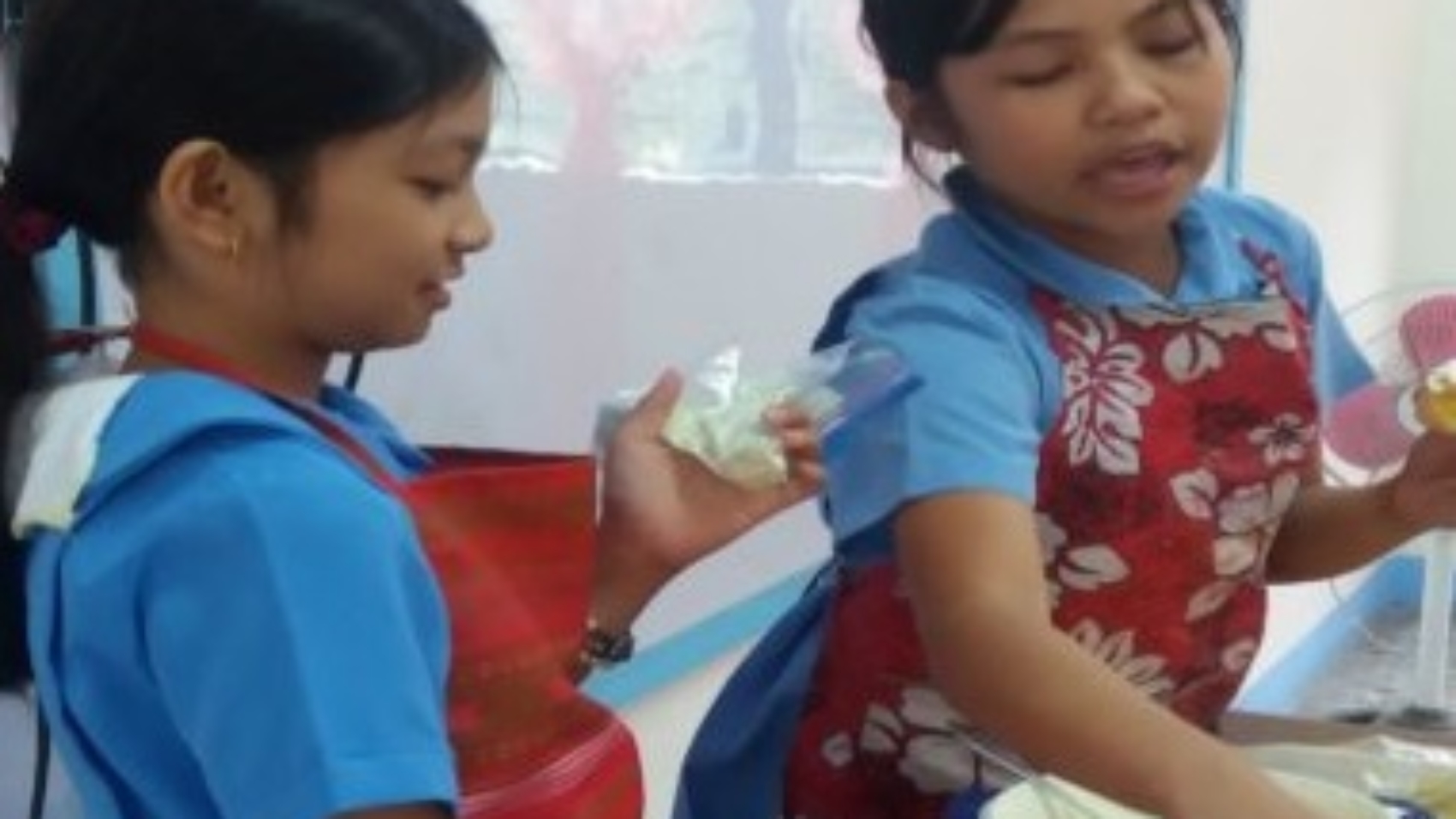 Kyla Mae De Luna and Valerie Cabe of Grade V Hebrews of the Philippine Christian University (PCU) – Dasmariñas Campus explain to their classmates how to frost cupcakes. This is one of their activities in English wherein they need to present a step-by-step procedure in accomplishing an activity using transitional devices. “To enumerate and execute the steps chronologically, you need to use transitional words like ‘first’, ‘then’, ‘next’, and ‘finally’,” explained Mrs. Rosalina Sumagui, an English teacher. (Photo and text by Rosalina Sumagui) 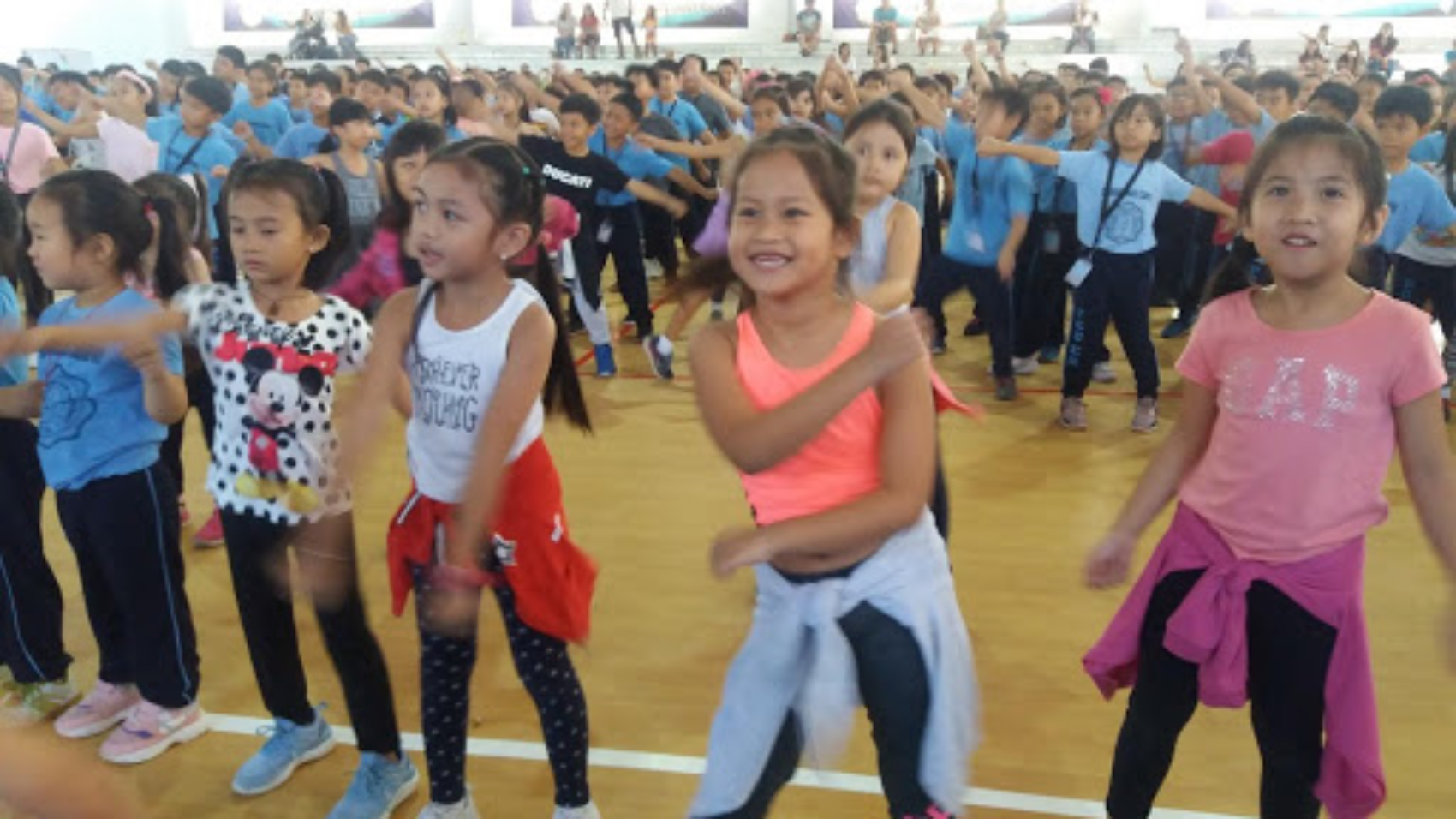 The Kiddie Kollege children, together with the elementary pupils, apparently enjoy dancing Zumba as they smilingly sway and stretch their arms out during the Friday Fitness Frenzy Zumba Dance Program held at the new gymnasium on March 8, 2019. Aside from leading the Zumba Exercise, Sir Ronald Cabalit, Zumba master, teaches the kids the Wellness Dance, which they will be performing a week before the Sports Fest. “Kids must have healthy body and mind before the intramurals begin,” said Dr. Lenalee C. Borromeo, principal of the Elementary School Department. (Photo and text by Rosalina Sumagui)